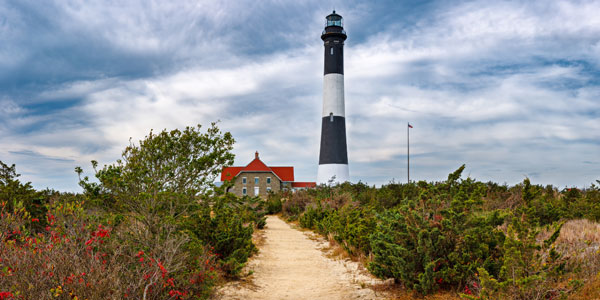 There’s so much to see and do in the idyllic landscape of Suffolk County, located on the eastern half of Long Island. Accessible within a few hours’ drive or an even shorter train ride from New York City, this place of wide-open spaces and pristine seashores can seem a world away from the hustle and bustle of the city.

Suffolk County was one of the original counties of New York State and was founded in the mid-1600s. At that time, thick forests covered the island, and it was populated by the Montauk Native American people. Early European settlers farmed, fished, and depended on lumber from the abundant trees. During the Revolutionary War, the island was occupied by the British.

Whaling was a main source of industry on the island until the mid-1800s. In 1844, a railroad to Greenport enabled Long Island to grow and develop economically. And in the early 1900s, the island gained popularity as a retreat for the rich and famous, spawning the mansions that inspired F. Scott Fitzgerald’s The Great Gatsby.

Today, the island is an eclectic mix of old and new. Tourism is still highly popular, and while agriculture is no longer the main industry, it’s making a comeback with the east end’s vineyards and farmers’ markets.

From the more urban areas of Queens, Brooklyn, and Nassau County on the western half of the island, to the more spread-out spaces of Suffolk County to the east, Long Island offers something for everyone.

Where to Go in Suffolk County

If you’re looking for a list of some fun destinations to visit in Suffolk County, see below - and pick a place that’s right for you!

For a classic Colonial beach experience:

Baron’s Cove Sag Harbor is a classic beachfront resort offering guests airy, bright rooms, many with water views or direct pool access. Take the complimentary shuttle to one of the nearby beaches, relax in the on-site spa, or enjoy fresh-caught seafood in the dining room.

For the wine connoisseur:

The Sannino Vineyard offers a retreat in the midst of Suffolk County vineyards. Visit their tasting room to sample the made-on-site syrah, rosè, Merlot, and more. Or, take a tour of the property to explore the wine-making process from grape to bottle.

For the Roaring ’20s romantic:

Experience a little of the Gilded Age for yourself at the Oheka Castle Hotel & Estate. A AAA Four Diamond-rated property, the Castle has been featured in a host of movies, television shows, and ad shoots — most notably in the opening scenes of 1941 film Citizen Kane. Enjoy the grounds, the exquisite rooms, or the chef-prepared delicacies in the dining room

Parrish Art Museum is filled with the paintings, sculptures, and photographs of artists from Long Island, past and present. View more than 3,000 works inside, purchase an original piece to take home, or look to join a class.

For the ultimate escape from city life:

Visit Fire Island, a popular summertime destination that’s easily accessible - some parts by car, other parts by ferry. If you travel to one of the car-free areas by ferry, you can head to some of the most popular restaurants and hangouts - or to the Otis Pike Fire Island High Dune Wilderness — New York State’s only federally designated wilderness area.